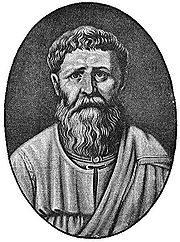 Aurelius Augustinus, Augustine of Hippo (“The knowledgeable one”) (November 13, 354–August 28, 430) was one of the most important figures in the development of Western Christianity. In Roman Catholicism, he is a saint and pre-eminent Doctor of the Church. Many Protestants, especially Calvinists, consider him to be one of the theological fountainheads of Reformation teaching on salvation and grace. Born in Africa as the eldest son of Saint Monica, he was educated and baptized in Italy. His works—including The Confessions, which is often called the first Western autobiography—are still read by Christians around the world.

Saint Augustine was born in 354 in Tagaste, a provincial Roman city in North Africa. He was raised and educated in Carthage. His mother Monica was a devout Catholic1 and his father Patricius a pagan, but Augustine followed the controversial Manichaean religion, much to the horror of his mother. As a youth Augustine lived a hedonistic lifestyle for a time, and in Carthage, he developed a relationship with a young woman who would be his concubine for over a decade, with whom he had a son. His education and early career was in philosophy and rhetoric, the art of persuasion and public speaking. He taught in Tagaste and Carthage, but desired to travel to Rome where he believed the best and brightest rhetoricians practiced (he was later to find out that they would simply refuse to pay). However, Augustine grew disappointed with the Roman schools, which he found apathetic. Manichean friends introduced him to the prefect of the City of Rome, Symmachus, who had been asked to provide a professor of rhetoric for the imperial court at Milan.

The young provincial won the job and headed north to take up his position in late 384. At age thirty, Augustine had won the most visible academic chair in the Latin world, at a time when such posts gave ready access to political careers. However, he felt the tensions of life at an imperial court, lamenting one day as he rode in his carriage to deliver a grand speech before the emperor, that a drunken beggar he passed on the street had a less careworn existence than he.

His mother Monica pressured him to become a Catholic, but it was the bishop of Milan, Ambrose, who had most influence over Augustine. Ambrose was a master of rhetoric like Augustine himself, but older and more experienced. Prompted in part by Ambrose’s sermons, and other studies, including a disappointing meeting with a key exponent of Manichaean theology, Augustine moved away from Manichaeism; but instead of becoming Catholic like Ambrose and Monica, he converted to a pagan Neoplatonic approach to truth, saying that for a time he had a sense of making real progress in his quest, although he eventually lapsed into skepticism.

Augustine’s mother had followed him to Milan and he allowed her to arrange a society marriage, for which he abandoned his concubine (however he had to wait two years until his fiancée came of age; he promptly took up in the meantime with another woman). It was during this period Augustine of Hippo uttered his famous prayer, “Grant me chastity and continence, but not yet” [da mihi castitatem et continentiam, sed noli modo].

In the summer of 386, after having read an account of the life of Saint Anthony of the Desert which greatly inspired him, Augustine underwent a profound personal crisis and decided to convert to Christianity, abandon his career in rhetoric, quit his teaching position in Milan, give up any ideas of marriage (much to the horror of his mother), and devote himself entirely to serving God and the practices of priesthood, which included celibacy. Key to this conversion/’born again’ experience was the voice of a small girl he heard at one point telling him in a sing-song voice to ‘Take and read’ the Bible, at which point he opened the Bible at random and fell upon a passage from St. Paul. He would detail his spiritual journey in his famous Confessions, which went on to become a classic of both Christian theology and world literature. Ambrose baptized Augustine on Easter day in 387, and soon thereafter in 388 he returned to Africa. On his way back to Africa his mother died, as did his son soon after, leaving him relatively alone in the world without family.

Upon his return to north Africa he created a monastic foundation at Tagaste for himself and a group of friends. In 391 he was ordained a priest in Hippo Regius, (now Annaba, in Algeria). He became a famous preacher (more than 350 preserved sermons are believed to be authentic), and was noted for combating the Manichaean heresy.

In 396 he was made coadjutor bishop of Hippo (assistant with the right of succession on the death of the current bishop), and remained as bishop in Hippo until his death in 430. He left his monastery, but continued to lead a monastic life in the episcopal residence. He left a Rule (Latin, Regula) for his monastery that has led him to be designated the “patron saint of Regular Clergy,” that is, parish clergy who live by a monastic rule.

Augustine died on August 28, 430, during the siege of Hippo by the Vandals. He is said to have encouraged its citizens to resist the attacks, primarily on the grounds that the Vandals adhered to Arianism, which was heretical according to the doctrine of the Catholic Church.

Influence as a Theologian and Thinker

Augustine remains a central figure, both within Christianity and in the history of Western thought. In both his philosophical and theological reasoning, he was greatly influenced by Stoicism, Platonism and Neoplatonism, particularly by the work of Plotinus, author of the Enneads, probably through the mediation of Porphyry and Victorinus (as Pierre Hadot has argued). His generally favorable outlook upon Neoplatonic thought contributed to the “baptism” of Greek thought and its entrance into the Christian and subsequently the European intellectual tradition. His early and influential writing on the human will, a central topic in ethics, would became a focus for later philosophers such as Schopenhauer and Nietzsche.

It is largely due to Augustine’s arguments against the Pelagians, who did not believe in original sin, that Western Christianity has maintained the doctrine of original sin. However, Eastern Orthodox theologians, while they believe all humans were damaged by the original sin of Adam & Eve, have key disputes with Augustine about this doctrine, and as such this is viewed as a key source of division between East and West.

Augustine’s writings helped formulate the theory of the just war. He also advocated the use of force against the Donatists, asking “Why … should not the Church use force in compelling her lost sons to return, if the lost sons compelled others to their destruction?” (The Correction of the Donatists, 22–24)

St. Thomas Aquinas took much from Augustine’s theology while creating his own unique synthesis of Greek and Christian thought after the widespread rediscovery of the work of Aristotle.

While Augustine’s doctrine of divine predestination would never be wholly forgotten within the Catholic Church, finding eloquent expression in the works of Bernard of Clairvaux, Reformation theologians such as Martin Luther and John Calvin would look back to him as the inspiration for their avowed capturing of the Biblical Gospel. Later, within the Catholic Church, the writings of Cornelius Jansen, who claimed heavy influence from Augustine, would form the basis of the movement known as Jansenism; some Jansenists went into schism and formed their own church.

Augustine was canonized by popular recognition and recognized as a Doctor of the Church in 1303 by Pope Boniface VIII. His feast day is August 28, the day on which he is thought to have died. He is considered the patron saint of brewers, printers, theologians, sore eyes, and a number of cities and dioceses.

The latter part of Augustine’s Confessions consists of an extended meditation on the nature of time. Catholic theologians generally subscribe to Augustine’s belief that God exists outside of time in the “eternal present”; that time only exists within the created universe.

Augustine’s meditations on the nature of time are closely linked to his consideration of the human ability of memory. Frances Yates in her 1966 study, The Art of Memory argues that a brief passage of the Confessions, X.8.12, in which Augustine writes of walking up a flight of stairs and entering the vast fields of memory (see text and commentary) clearly indicates that the ancient Romans were aware of how to use explicit spatial and architectural metaphors as a mnemonic technique for organizing large amounts of information. A few French philosophers have argued that this technique can be seen as the conceptual ancestor of the user interface paradigm of virtual reality.

According to Leo Ruickbie, Augustine’s arguments against magic, differentiating it from miracle, were crucial in the early Church’s fight against paganism and became a central thesis in the later denunciation of witches and witchcraft.

Augustine and the Jews

Augustine wrote in Book 18, Chapter 46 of The City of God [1] (one of his most celebrated works along with The Confessions): “The Jews who slew Him, and would not believe in Him, because it behooved Him to die and rise again, were yet more miserably wasted by the Romans, and utterly rooted out from their kingdom, where aliens had already ruled over them, and were dispersed through the lands (so that indeed there is no place where they are not), and are thus by their own Scriptures a testimony to us that we have not forged the prophecies about Christ.”

Augustine deemed this scattering important because he believed that it was a fulfillment of certain prophecies, thus proving that Jesus was the Messiah. This is because Augustine believed that the Jews who were dispersed were the enemies of the Christian Church. He also quotes part of the same prophecy that says “Slay them not, lest they should at last forget Thy law”. Some people have used Augustine’s words to attack Jews as anti-Christian, while others have used them to attack Christians as anti-Jewish. See Christianity and anti-Semitism.