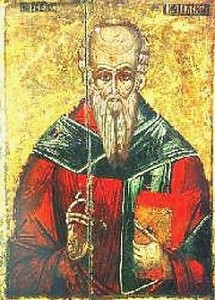 Clement of Alexandria (Titus Flavius Clemens), was the first member of the Church of Alexandria to be more than a name, and one of its most distinguished teachers. He was born about the middle of the 2nd century, and died between 211 and 216.

He was not born in Egypt (Stromata, i. 1). Athens is named as his birthplace by the sixth-century Epiphanius Scholasticus, and this is supported by the classical quality of his Greek. His parents seem to have been wealthy pagans of some social standing. The thoroughness of his education is shown by his constant quotation of the Greek poets and philosophers. He travelled in Greece, Italy, Palestine, and finally Egypt. He became the colleague of Pantaenus, the head of the catechetical school of Alexandria, and finally succeeded him in the direction of the school. One of his most popular pupils was Origen. During the persecution of Septimius Severus (202 or 203) he sought refuge with Alexander, then bishop [possibly of Flaviada] in Cappadocia, afterward of Jerusalem, from whom he brought a letter to Antioch in 211.

The trilogy into which Clement’s principal remains are connected by their purpose and mode of treatment is composed of the Protrepticus (“Exhortation to the Greeks”), the Paedagogus (“Instructor”), and the Stromata (“Miscellanies”). Overbeck calls it the boldest literary undertaking in the history of the Church, since in it Clement for the first time attempted to set forth Christianity for the faithful in the traditional forms of secular literature. The Protrepticus forms an introduction inviting the reader to listen, not to the mythical legends of the gods, but to the “new song” of the Logos, the beginning of all things and creator of the world. He denounces what he claims to be the folly of idolatry and the pagan mysteries, the shamefulness of the pederastic practices of the Greeks, and the horrors of pagan sacrifice, and argues that the Greek philosophers and poets only guessed at the truth, while the prophets set forth a direct way to salvation; and now the divine Logos speaks in his own person, to awaken all that is good in the soul of man and to lead it to immortality. Having thus laid a foundation in the knowledge of divine truth, he goes on in the Paedagogus to develop a Christian ethic. His design does not prevent him from taking a large part of his material from the Stoic Musonius Rufus, the master of Epictetus; but for Clement the real instructor is the incarnate Logos.

The first book deals with the religious basis of Christian morality, the second and third with the individual cases of conduct. As with Epictetus, true virtue shows itself with him in its external evidences by a natural, simple, and moderate way of living. The Stromata goes further and aims at the perfection of the Christian life by initiation into complete knowledge. The first of these works is addressed to the unconverted, the second to the new Christian, and the third appeals to the mature believer. It attempts, on the basis of Scripture and tradition, to give such an account of the Christian faith as shall answer all the demands of learned men, and conduct the student into the innermost realities of his belief. Clement entitled this work Stromateis, “patchwork,” because it dealt with such a variety of matters. He intended to make but one book of this; at least seven grew out of it, without his having treated all the subjects proposed. The absence of certain things definitely promised has led scholars to ask whether he wrote an eighth book, as would appear from Eusebius (VI. xiii. 1) and the Florilegia, and various attempts have been made to identify with it short or fragmentary treatises appearing among his remains. In any case the “excerpts” and “selections” which, with part of a treatise on logical method, are designated as the eighth book in the single (11th century) manuscript of the Stromata, are not parts of the Hypotyposes which Clement is known to have written. This work was a brief commentary on selected passages covering the whole Bible, as is shown in the fragments preserved by Oecumenius and in the Latin version of the commentary on the Catholic Epistles made at the instance of Cassiodorus. Besides the great trilogy, the only complete work preserved is the treatise “Who is the Rich Man that Shall Be Saved?” based on Mark 10:17-31, and laying down the principle that not the possession of riches but their misuse is to be condemned. There are extant a few fragments of the treatise on the Passover, against the Quartodecimanism position of Melito of Sardis, and only a single passage from the “Ecclesiastical Canon” against the Judaizers. Several other works are known only by their titles.

His Significance for the Church

The significance of Clement in the history of the development of doctrine is, according to Harnack, that he knew how to replace the apologetic method by the constructive or systematic, to turn the simple church tradition into a scientific dogmatic theology. It is a marked characteristic of his that he sees only superficial and transient disagreement where others find a fundamental opposition. He is able to reconcile, or even to fuse, differing views to an extent which makes it almost impossible to attribute to him a definite individual system. He is admittedly an eclectic (Stromata, i. 37). This attitude determines especially his treatment of non-Christian philosophy. Although the theory of a diabolical origin for it is not unknown to him, and although he shows exhaustively that the philosophers owe a large part of their knowledge to the writings of the Old Testament, yet he seems to express his own personal conviction when he describes philosophy as a direct operation of the divine Logos, working through it as well as through the law and his direct revelation in the Gospel to communicate the truth to men. It is true that the knowledge of the philosophers was elementary, fragmentary, and incapable of imparting true righteousness; and it was far surpassed by the revelation given through the law and the prophets, as that again was still further surpassed by the direct revelation of the incarnate Logos; but this idea of relative inferiority does not prevent him from showing that his whole mental attitude is determined and dominated by the philosophical tradition.

Not all later ecclesiastics have been happy with his views. While his feast day is traditionally December 4, Pope Benedict XIV removed Clement from the Roman martyrology in 1748.

Thus he emphasizes the permanent importance of philosophy for the fulness of Christian knowledge, explains with special predilection the relation between knowledge and faith, and sharply criticizes those who are unwilling to make any use of philosophy. He pronounces definitely against the sophists and against the hedonism of the school of Epicurus. Although he generally expresses himself unfavorably in regard to the Stoic philosophy, he really pays marked deference to that mixture of Stoicism and Platonism which characterized the religious and ethical thought of the educated classes in his day. This explains the value set by Clement on gnosis. To be sure, he constantly opposes the concept of gnosis as defined by the Gnostics. Faith is the foundation of all gnosis, and both are given by Christ. As faith involves a comprehensive knowledge of the essentials, knowledge allows the believer to penetrate deeply into the understanding of what he believes; and this is the making perfect, the completion, of faith. In order to attain this kind of faith, the “faith of knowledge,” which is so much higher than the mere “faith of conjecture,” or simple reception of a truth on authority, philosophy is permanently necessary. In fact, Christianity is the true philosophy, and the perfect Christian the true Gnostic — but again only the “Gnostic according to the canon of the Church ” has this distinction. Also, he rejects the Gnostic distinction of “psychic” and “pneumatic” men; all are alike destined to perfection if they will embrace it.

From philosophy he takes his conception of the Logos, the principle of Christian gnosis, through whom alone God’s relation to the world and his revelation is maintained. God he considers transcendentally as unqualified Being, who can not be defined in too abstract a way. Though his goodness operated in the creation of the world, yet immutability, self sufficiency, incapability of suffering are the characteristic notes of the divine essence. Though the Logos is most closely one with the Father, whose powers he resumes in himself, yet to Clement both the Son and the Spirit are “first-born powers and first created”; they form the highest stages in the scale of intelligent being, and Clement distinguishes the Son-Logos from the Logos who is immutably immanent in God, and thus gives a foundation to the charge of Photius that he “degraded the Son to the rank of a creature.” Separate from the world as the principle of creation, he is yet in it as its guiding principle. Thus a natural life is a life according to the will of the Logos. The Incarnation, in spite of Clement’s rejection of the Gnostic Docetism, has with him a decidedly Docetic character. The body of Christ was not subject to human needs. He is the good Physician; the medicine which he offers is the communication of saving gnosis, leading men from paganism to faith and from faith to the higher state of knowledge. This true philosophy includes within itself the freedom from sin and the attainment of virtue. As all sin has its root in ignorance, so the knowledge of God and of goodness is followed by well-doing. Against the Gnostics Clement emphasizes the freedom of all to do good.

Clement lays great stress on the fulfilment of moral obligations. In his ethical expressions he is influenced strongly by Plato and the Stoics, from whom he borrows much of his terminology. He praises Plato for setting forth the greatest possible likeness to God as the aim of life; and his portrait of the perfect Gnostic closely resembles that of the wise man as drawn by the Stoics. Hence he counsels his readers to shake off the chains of the flesh as far as possible, to live already as if out of the body, and thus to rise above earthly things. He is a true Greek in the value which he sets on moderation; but his highest ideal of conduct remains the mortification of all affections which may in any way disturb the soul in its career. As Harnack says, the lofty ethical-religious ideal of the attainment of man’s perfection in union with God, which Greek philosophy from Plato down had worked out, and to which it had subordinated all scientific worldly knowledge, is taken over by Clement, deepened in meaning, and connected not only with Christ, but with ecclesiastical tradition.

The way, however, to this union with God is for Clement only the Church’s way. The communication of the gnosis is bound up with holy orders, which give the divine light and life. The simple faith of the baptized Christian contains all the essentials of the highest knowledge; by the Eucharist the believer is united with the Logos and the Spirit, and made partaker of incorruptibility. Though he lays down at starting a purely spiritual conception of the Church, later the exigencies of his controversy with the Gnostics make him lay more stress on the visible church. As to his use of Scripture, the extraordinary breadth of his reading and manifold variety of his quotations from the most diverse authors make it very difficult to determine exactly what was received as canonical by the Alexandrian Church of that period. Though he uses the Apocryphal Gospels, our four alone have supreme authority for him. For the other New Testament writings he seems not to have had as definite a line of demarcation; but whatever he recognized as of apostolic origin had for him an authority distinct from, and higher than, that of all other ecclesiastical tradition.